Newsroom members of the Halifax Typographical Union went on a defensive strike Jan. 23, 2016, against The Chronicle Herald. It lasted almost 19 months, but in the end, the HTU stood its ground on job security.

AFTER 565 DAYS, IT’S FINALLY OVER - Halifax members vote 94% to ratify deal, end strike at Herald It was an endurance test of almost 19 months, but the Halifax Typographical Union stood its ground on the key issue of job security. Members today voted 94 per cent in favour of ratifying an eight-year deal. HTU President Ingrid Bulmer said it’s been a momentous event. “We are relieved that the strike has finally ended, but the feelings are mixed because we are losing more than half our newsroom staff, colleagues who are good friends, great journalists and even better people.” CWA Canada President Martin O’Hanlon said “It’s a huge relief to put this behind us after 18 horrible months. I can’t express enough how proud I am of our members who stood together for so long to defend quality jobs and quality journalism.” He noted that “it’s not a great deal, but it’s the best we could get in the circumstances and it’s better than a month ago. Now we have to try to put this behind us, heal the wounds and bring quality journalism back to the Herald. “The best thing people can do for our members now is resubscribe and support the Herald. It’s vital [...]

Tentative deal reached in Chronicle Herald strike - Joint Media Statement HTU Strike at The Chronicle Herald (August 5, 2017 / HALIFAX) – After two days of mediation over the Natal Day long weekend, The Chronicle Herald and its striking newsroom workers have tentatively reached an agreement to end the 18-month strike. The terms of the deal have not been disclosed and a media blackout will continue until the agreement is ratified. The parties thank provincially appointed mediator William Kaplan for his assistance and are pleased to focus on putting this difficult period behind them. We look forward to working together to provide Nova Scotians with the news and information they rely upon.

CWA Canada welcomes inquiry into Chronicle Herald strike - HALIFAX – CWA Canada, which represents striking newsroom workers at the Halifax Chronicle Herald, welcomes the news that the Nova Scotia government has called an industrial commission into the labour dispute. CWA Canada President Martin O’Hanlon said the union will “do all we can to work with the commissioner to get a deal as soon as possible.” The union has agreed to numerous major concessions in bargaining, including a five-per-cent wage cut, an end to the defined benefit pension plan, longer work hours and more. “Unfortunately, that has not been enough for the Herald, which has refused to back off from its many unreasonable concession demands,” O’Hanlon said. “We hope the Herald will now step up to the plate, do the right thing and give its long-time employees a fair deal.” Ingrid Bulmer, president of the Halifax Typographical Union (CWA Canada Local 30130), called the announcement “a bit of a bright light in this long dispute.” “I personally am relieved that this is going to happen and I’m anxious to get started,” she said. Commissioner William Kaplan will kick off the process Aug. 4 by meeting with both sides in an attempt to mediate a deal. If an agreement is not [...]

Striking journalists ‘still in shock’ at $40,000 donation - DEBORAH RICHMOND | Web Editor A wave of exhilaration has swept through social media with news of a stunning $40,000 donation to striking members of CWA Canada’s Halifax Local. “We are still in shock,” said Ingrid Bulmer, president of the Halifax Typographical Union (HTU), who was presented a ceremonial cheque Thursday by Janet Hazelton, president of the Nova Scotia Nurses’ Union (NSNU). What appears to be a record-setting donation resulted from a fundraising frenzy at the annual meeting of the NSNU, which has 6,900 members in 122 Locals. Delegates had arrived knowing they would be called upon once again to support the 53 newsroom workers at The Chronicle Herald, who’ve been on the picket line since Jan. 23, 2016. Unionized nurses have been incredibly generous supporters of the HTU. At the NSNU convention last year, when the strike was into its fourth month, a motion to pass the hat yielded pledges totalling an astounding $13,176. (An additional $1,500 was donated throughout the year by the provincial union and even more came from individual Locals. The Canadian Federation of Nurses Unions donated $5,000 last year.) This year, some Locals arrived with cheques already in hand. One, with three members, handed over [...]

‘Struggling’ Herald on buying spree with strike in 15th month - HALIFAX – The owners of The Chronicle Herald have struck a deal to expand what they have long described as a business that was struggling to stay alive. Transcontinental Inc. has agreed to sell its publication assets across Atlantic Canada to SaltWire Network, a group that publishes The Chronicle Herald. Herald president Mark Lever is also president of Saltwire. The announcement is in stark contrast to the concessions and regressive demands that the Herald has insisted upon from its striking newsroom staff over the past 16 months. “We were told that the Herald’s demise was imminent if it didn’t immediately cut wages and other benefits to newsroom staff,” said Ingrid Bulmer, president of the Halifax Typographical Union. “Apparently, that was a total fabrication. The company is not struggling but is instead planning to expand.” The 54 reporters, photographers, editors and support staff  have agreed to concessions in wages, changes to the pension plan and a shift in the work that the union performs. “It was never enough for the Herald for reasons that have become clearer today,” Bulmer said. “They never did intend to bargain fairly with us and now it has become apparent that they were instead working on [...] 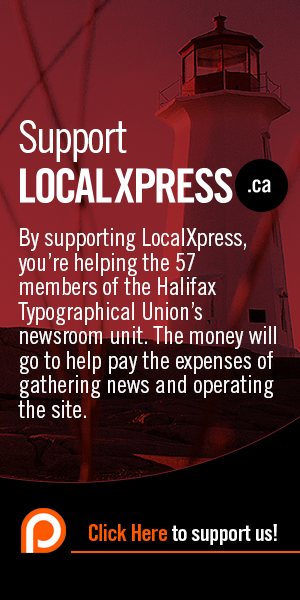 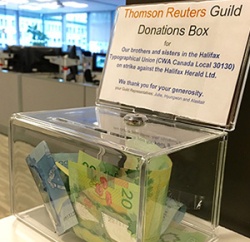 CWA Canada’s Locals are gathering donations and messages of support for their fellow members who are on strike against the Herald. The Thomson Reuters branch of the Canadian Media Guild set up a donation box in their Toronto office.